LAS VEGAS, Jan. 7, 2017 /PRNewswire/ -- Live from the Las Vegas Convention Center at CES 2017, Last Gadget Standing and Mobile Apps Showdown, produced by Living in Digital Times, once again drew a standing room only, rowdy crowd applauding for their favorite devices and apps to help determine this year's big winners. Who walked away with a year of bragging rights?  MATRIX PowerWatch, a body heat powered smartwatch, won in Last Gadget Standing, now in its 16th year, while Linksys Velop, a Wi-Fi mesh router, captured the online vote. For the 7th Annual Mobile Apps Showdown, MyScript Nebo, a handwriting recognition app, took home the coveted prize as both the best app at the live event and the favorite of online voters. 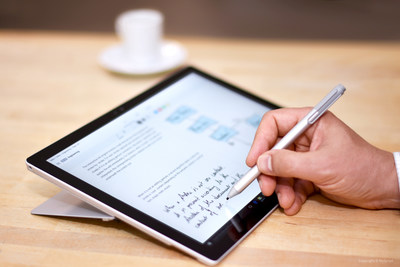 Back for a second year, tech guru and founder of Yahoo! Tech, David Pogue held court as host.  All morning the audience was entertained with another year of creative and funny presentations from a body heat competition to a craft beer tasting and a live DJ set! There was even an appearance from a local Las Vegas news anchor.  Attendees were challenged to answer David's trivia questions to win great prizes, from fitness trackers and headphones to smart toothbrushes and drones.  Lenovo's ongoing sponsorship and commitment to innovation is appreciated.

"I can't think of a more entertaining, more creative way to showcase some of the most innovative tech at CES, than by pitting products against one another for laughs and applause," said Robin Raskin, founder a and president of Living in Digital Times. "It's exciting to see the crowds turn up year after year to have their say in Last Gadget Standing and Mobile Apps Showdown."

"After three days of exhaustion on the CES show floor, you'd think there would be nothing left to amaze us. But every year, the candidates for Last Gadget Standing and Mobile Apps Showdown blow my mind," said David Pogue, founder, Yahoo! Tech. "Every one of these inventions deserves an award for ingenuity and brilliance!"

Each finalist was selected by a panel of judges, including journalists, engineers, designers and developers.  After passionate debate and discussion, the judges decided on the Top 11 gadgets as well as the Top 6 mobile apps to compete in a live competition and online vote to prove their staying power at CES 2017. Winners of online voting were determined by popular vote. In person, an applause-o-meter measured audience enthusiasm to determine the winner.

Mobile Apps Showdown started with a special ceremony honoring four students who were named 2017 Young Innovators to Watch. Through the generosity of the Kay Family Foundation, Lenovo and Samsung, The Young Innovators program offers scholarship awards to high school and college students developing new technology products and experiences.  They are:

Sara Du, Irvine, CA, developed Bluejay, an app to assist emergency responders. The app connects through Bluetooth to an Intel Edison (or Arduino or Raspberry Pi) that is attached to a drone. Emergency responders can then fly the drone over areas that have been impacted by natural disaster and collect data, such as GPS location, from those who are stranded.

Shalin Shah, Las Flores, CA, developed Lumos, an app that can aid early detection of glaucoma, the leading cause of blindness worldwide.  The app connects to a low-cost lens attachment that allows non-specialists to photograph the retina, and an algorithm that analyzes the retinal image for patterns of glaucoma and identifies risk.

Utkarsh Tandon, Cupertino, CA, developed OneRing, a wearable ring that analyzes movement patterns to diagnose and assess Parkinson's disease. It provides high precision monitoring at every hour of the day to the fingertips of patients to track disease progression and analyze the impact of treatments.

Emily Post, New York, NY created Finding Clover, a geo-location mobile game that supports the movement to reduce and ultimately eliminate dangerous toxins. Kids look for clover and accumulate points while they learn how they can play a part in the movement.

"All of the students that entered clearly have both technical acumen and a love of helping people and the planet. We hope scholarships and recognitions like this one help to raise a generation of innovators and problem solvers," said Robin Raskin, founder and president of Living in Digital Times.

Scholarship winners received up to $2,000 (plus hi-tech gear), a free trip to the Consumer Electronics Show in Las Vegas, international recognition, and the opportunity to meet technology industry professionals, journalists and influencers at a highly publicized awards ceremony.

CES is the world's gathering place for all who thrive on the business of consumer technologies. It has served as the proving ground for innovators and breakthrough technologies for 50 years—the global stage where next-generation innovations are introduced to the marketplace. As the largest hands-on event of its kind, CES features all aspects of the industry. Owned and produced by the Consumer Technology Association (CTA)™, the technology trade association representing the $287 billion U.S. consumer technology industry, it attracts the world's business leaders and pioneering thinkers. Check out CES video highlights. Follow CES online at CES.tech and on social.